Hi Sproutlets! Welcome To The Wiki!

We are a collaborative encyclopedia dedicated to the now defunct television channel, PBS Kids Sprout. A joint venture among PBS, Comcast, Sesame Workshop and HiT Entertainment, PBS Kids Sprout started out as an on-demand service, and later became a full-fledged cable TV channel on September 26, 2005, replacing the 24/7 PBS Kids Channel. We are currently editing more than two thousand pages and we want you to help!

The multi-platform approach was designed to appeal to different viewing habits, with the linear channel focused on variety, and the on-demand services focused on instantaneous access to specific programs. The linear service was designed around dayparted programming blocks, featuring activities and other feature segments presented by on-air hosts. Some of these segments were designed to promote supplemental content (including activities and interactive features) on Sprout's website

Sprout's scheduling also eschewed the practice of combining multiple episodes of short-form children's series into a single half-hour episode with interstitial segments for U.S. broadcast, electing to air such programs individually in their original format.

On Sprout's 10th anniversary on September 26, 2015, Barney and Friends, Thomas and Friends and Super Why! were removed and replaced with other shows. The channel re-branded to Universal Kids on September 9, 2017.

Since sprout.fandom.com has been invaded by trolls, little kids, and false information, we have decided to create a wiki for the real Sprout Channel and blocks with all of the correct information. Our mission to be an honest, complete archive of everything relating to the PBS Kids Sprout channel from September 26, 2005 to September 9, 2017. We will have pages on various shows and programming blocks. We won't let an important part of children's television be erased. Come join us today! 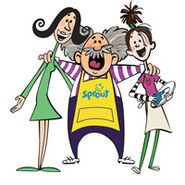 Where is Sprout now?
The original Sprout channel closed down in 2017.

What were Sprout's blocks?
Sprout's day usually started with Musical Mornings with Coo (later Sprout's Wiggly Waffle and then The Super Sproutlet Show). Once bigger children are off and out for the day, little ones could get stuck into The Sunny Side Up Show (later Sprout House). The Let's Go Show (later The Sprout Sharing Show and then Sprout Control Room) started once older children are home from nursery or school, and finally, it was The Good Night Show, designed to calm things down and encourage Sproutlets to get ready for bed.

Before you get started editing on the wiki, make sure you follow these rules: 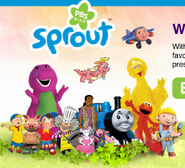 The Sprout is Always Here for You commercial was an advertisement that aired on PBS Kids Sprout to inform viewers of its three ventures - the 24-hour linear channel, video-on-demand (VOD), and its website, Sproutonline.com. It usually played prior to episodes of shows on Sprout on Demand or before iTunes podcasts.

Chica is an original character created for PBS Kids Sprout. She was the co-host of The Sunny Side Up Show, but later got her own show, The Chica Show.

For more, see All Shows.

PBS Kids Sprout TV Wiki is a fan site and is in no way affiliated with NBCUniversal and/or its subsidiaries or affiliates.

Community content is available under CC-BY-SA unless otherwise noted.
Advertisement